The public understanding of science in South Africa: reaching out to the next generation of scientists

Science plays a central role in modern societies. Science inspires curiosity, informs our world view, and provides a foundation for the development of new technologies and products that have a transformative effect on economies and on our daily lives. Science and education are inherently linked – science, as an institution, depends on the availability of sufficiently skilled graduates and technicians. Education, on the other hand, depends on science to constantly shift forward the frontiers of knowledge.

It is therefore no co-incidence that the Department of Science and Technology’s two major programmes for science engagement address the links between these two domains. The ‘Youth into Science Strategy’ outlines a broad range of interventions aimed at drawing the youth into science careers. The ‘Science Engagement Framework’ has established a strategic framework for engaging the South African public, with the aim of creating greater awareness of science, and inviting greater citizen participation in the institutions of science.

The HSRC has undertaken a range of research projects in support of these broad thematic policy domains. One question that is raised is that of the ‘public understanding of science’ – how do the public feel about science? How is science viewed as a career option? What sources of information do people use to learn more about science? Answers to these questions help us to understand the context in which programmes to encourage South Africans to become more involved in science must operate.

The South African Social Attitudes Survey has included such questions in its nationally representative surveys in 1999, 2010 and 2013. Attitudes towards science have seen some significant changes since 1999. While the majority of the public perceive science to make our lives ‘healthier, easier, and more comfortable’, there has been a slight decline in this opinion over time. The view that ‘the benefits of science are greater than any harmful effects’ was held by 60% of the population in 1999, but only 49% in 2013. At the same time, there has been an increase in the view that ‘we depend too much on science but not enough on faith’. While most South Africans consistently agree that ‘science makes our way of life change too fast’, they also believe that science and technology will create ‘more opportunities for the next generation’. Programmes aiming to draw the South African public into science careers need to contend with these attitudinal patterns and shifts. Framing science as beneficial to society will be key to such ambitions. Better understanding of the perceived trade-off between rapid change and future benefits may help to alleviate reservations about science, and create more positive attitudes towards its promise. Providing a space for constructive engagement between the institutions of faith and the institutions of science may help to mitigate the perceived tension between them. 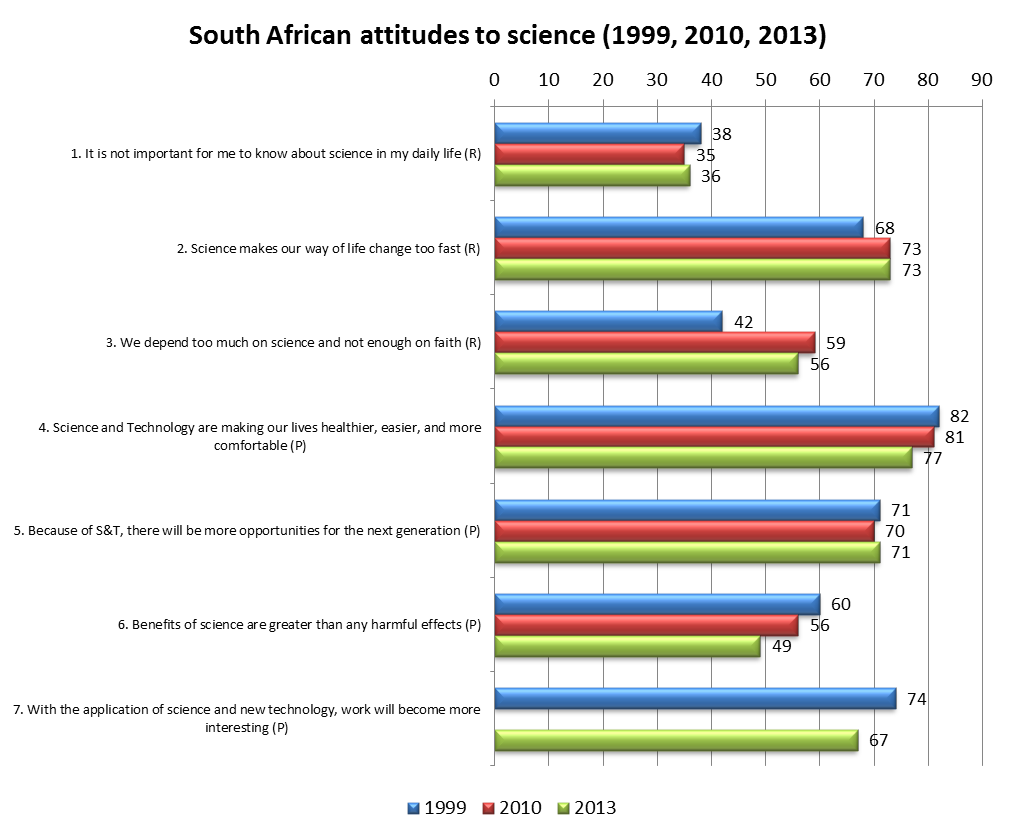 With these imperatives in mind, what do the data say about perceptions of science as a career choice? Most South Africans, and particularly younger South Africans, see science as a suitable career for women. However, there remains room for improvement here, and programmes to encourage young women to enter science careers should remain a priority. Most South Africans, and again particularly the youth, perceive jobs in science to be ‘very interesting’. However, only half of the age group 16-19 years believe that studying science will lead to a ‘good job’, while even fewer perceive the science that they learned in school to be useful in their daily lives, or useful in their work context. Programmes that aim to engage the youth need to directly address these perceptions – as they may be having a significant impact on learning pathways and career choices. 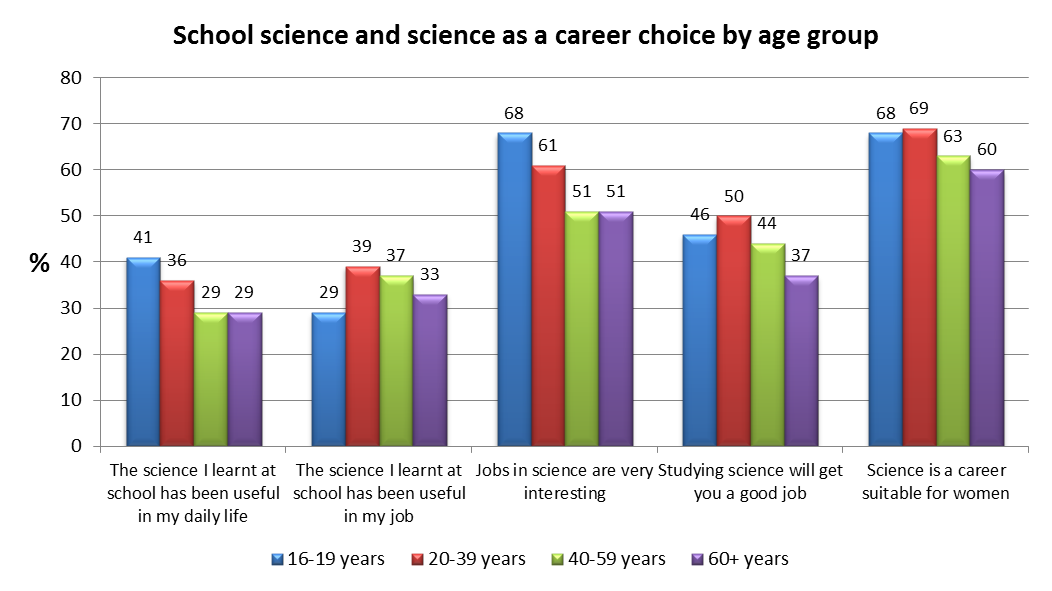 Science engagement programmes, and efforts to encourage the youth to become involved in science, require communication channels. How do the public learn about science? How can public engagement programmes reach their audiences? The evidence suggests that television, radio, newspapers and the internet should be the main channels, and that younger South Africans are adept at accessing a greater range of communication channels than older generations. However, privilege also makes a difference: radio is the preferred source of information about science for those with lower living standards, while those with a high living standard have access to a greater range of communication channels, and are far more likely to use the internet, newspapers and books to learn about science. Efforts to communicate with the public need to take these trends into consideration to develop appropriate messages, delivered through appropriate channels, to their target audiences. 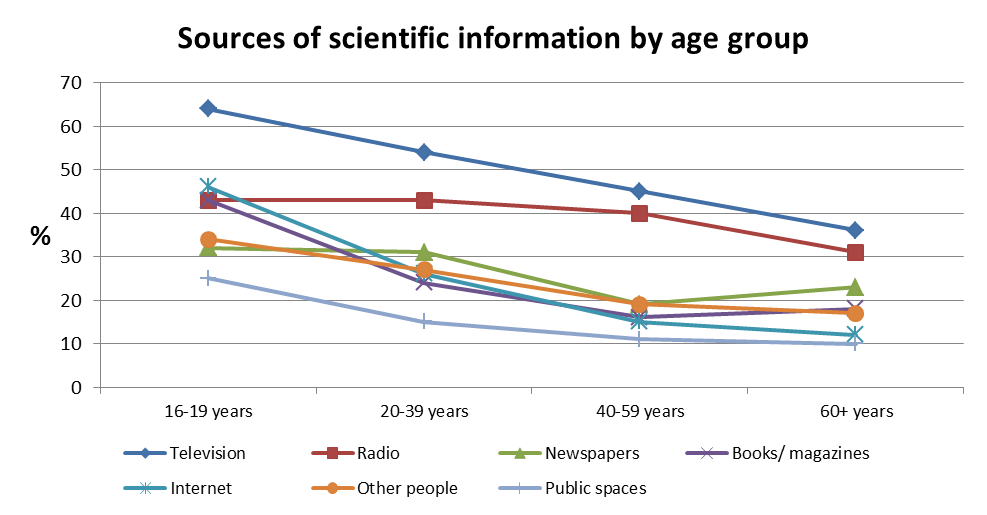 The Department of Science and Technology’s ambition to foster a knowledge society, in which South Africans perceive science to be an attractive career path, forms an important component of its overall strategic approach towards harnessing the power of science and technology to the benefit of the country. The good news is that the youth, compared to older generations, are better connected to sources of information about science and more positive about the prospects of a career in science. However, the youth remain to be convinced that the science they learn in school has application in their daily lives and careers, and it is here that research into curricula, pedagogy, and access to quality education may have promising intersections with research into public perceptions of science and science careers.